Jay Allison, the host and curator of This I Believe, is an independent broadcast journalist. His work appears often on NPR and has earned him five Peabody Awards. He is the founder of the public radio stations that serve Martha's Vineyard, Nantucket, and Cape Cod, where he lives.

Dan Gediman is the executive producer of This I Believe. His work has been heard on All Things Considered, Morning Edition, Fresh Air, Marketplace, Jazz Profiles, and This American Life. He has won many of public broadcasting's most prestigious awards, including the du Pont-Columbia Award.

To read more essays and submit your own, please visit www.thisibelieve.org. 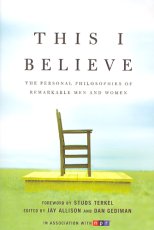 This I Believe: The Personal Philosophies of Remarkable Men and Women