Peter Bart, author of Infamous Players: A Tale of Movies, The Mob (And Sex), spent seventeen years as a film executive (at Paramount, MGM, and Lorimar Film Co.), only to return to print as editor in chief of Variety. Along the way, he was responsible for seven books, including Shoot Out, written with Peter Guber. He is now the host of Movie Talk, a weekly television show broadcast here and abroad. 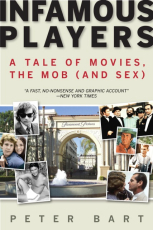 Infamous Players: A Tale of Movies, the Mob (and Sex)