Pippa Cuthbert is a New Zealander living and working in London. Ever since childhood she has been passionate about food and cooking. After studying Nutrition and Food Science at Otago University in New Zealand and working in the test kitchen of Nestlé New Zealand, she decided to travel the world in search of new and exciting culinary adventures. Now based in London, Pippa works as a food writer and stylist on books and magazines, and is also involved in advertising and commercials.

Food and writing are Lindsay Cameron Wilson's passions, so she blended the two at university where she studied History, Journalism, and the Culinary Arts. She has since worked in the test kitchens of Canadian Living Magazine in Toronto and Sunset Magazine in San Francisco. In 2001 she left her job as a food columnist in Halifax, Nova Scotia, and moved to London. That's when she met Pippa, and the work for their first book, Juice! began. Fuelled by juice, the two moved on to Ice Cream!, Soup! and now Barbecue! Lindsay continues to work as a food journalist in Canada, where she now lives with her husband, James, and son, Luke. 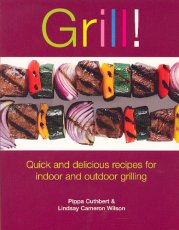 Grill!: Quick and delicious recipes for indoor and outdoor grilling