Richard Diana, M.D., retired from the Miami Dolphins after Super Bowl XVII to attend Yale School of Medicine. He has been an orthopedic consultant to several collegiate athletic programs as well as to the Boston Red Sox. Dr. Diana is a board-certified surgeon and has been named a Top 100 Doctor in America. He is a clinical instructor at Yale School of Medicine and attending surgeon at Yale-New Haven Hospital. 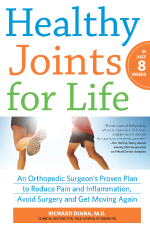 Healthy Joints for Life: An Orthopedic Surgeon's Proven Plan to Reduce Pain and Inflammation, Avoid Surgery and Get Moving Again