John Edward, author of Infinite Quest: Develop Your Psychic Intuition to Take Charge of Your Life, is an internationally acclaimed psychic medium, author, and lecturer. On his internationally syndicated talk shows, Crossing Over with John Edward and John Edward Cross Country, he captivated audiences worldwide with his unique abilities to connect people with loved ones who have crossed over to the Other Side. John has appeared on many other talk shows, including the Today Show, Oprah!, and The View, and has been a frequent guest on CNN's Larry King Live. He is a regular guest on morning radio, including New York's WPLJ and Los Angeles' KROQ. John has been featured in articles in the New York Times, the Los Angeles Times, People, and Entertainment Weekly. John is the author of several New York Times best-sellers, including Crossing Over: The Stories Behind the Stories and What if God Were the Sun? He conducts workshops and seminars around the world, and is the founder of the metaphysical website InfiniteQuest.com. John lives in New York with his family. 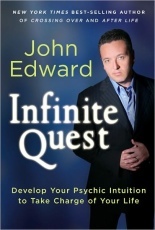 Infinite Quest: Develop Your Psychic Intuition to Take Charge of Your Life