For twenty-one years Marilyn Ferguson's influential Brain/Mind Bulletin reported on cutting-edge discoveries about the brain and consciousness to a diverse international audience. Her third book, The Aquarian Conspiracy: Personal and Social Transformation in Our Time, an international bestseller, has been called the Bible of the consciousness movement. Ferguson lives in southern California. 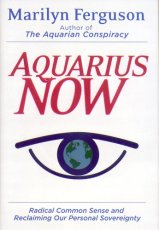