Jonathan Foreman is a New York-based writer. He was formerly a controversial but much-loved columnist and film critic for the New York Post, and a contributing editor at the Manhattan Institute's City Journal. An essay he wrote on urban civility for City Journal inspired some of New York Mayor Rudy Giuliani's famous "quality of life" reforms.

The son of blacklisted High Noon screenwriter Carl Foreman, the author's own sense of American patriotism was shaped by years as an American growing up between London and the US, and by his extensive travels around the globe. But it was dramatically deepened by his experience of the 9/11 terrorist attacks and by his two tours as a was correspondent embedded with the US Army during Operation Iraqi Freedom.

A former lawyer, Foreman has a BA and MA in history from Cambridge University and a JD from the University of Pennsylvania. He has written for a variety of publications ranging from the Weekly Standard to the New Yorker. 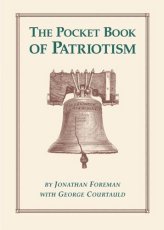 The Pocket Book of Patriotism