Rozanne Gold began her career at the age of 24 as chef to then-New York mayor Ed Koch. The author of nine cookbooks, Gold is a three-time winner of the James Beard Foundation Book Award and winner of the International Association of Culinary Professionals (IACP) Cookbook Award. She is the entertaining columnist for Bon Appètit magazine and has written for The New York Times, Gourmet, Cooking Light, and many other national publications. She is the chef-director of the restaurant consulting firm that created some of the world's most famous restaurants, including the Rainbow Room and Windows on the World. Gold lives in New York City.

Helen Kimmel, M.S., R.D., is a registered dietitian and certified nutritionist. She began her career as the staff nutritionist at New York's legendary Rainbow Room. As a nutrition consultant, Kimmel has contributed to many projects including various Reader's Digest cookbooks and Rozanne Gold's 1-2-3 series. She has lectured for Cornell University, the American Heart Association, and the Alzheimer's Association and provides personalized nutrition counseling and conducts healthy-cooking classes. She lives in New Jersey with her husband and two children. 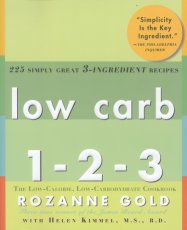