Darren Hardy, author of The Compound Effect: Jumpstart Your Income, Your Life, Your Success, has been a leader in the personal development industry for sixteen years, having led two personal development-based television networks, producing and launching more than a thousand television shows, live events, products, and programs with many of the world's top experts.

As an entrepreneur, Darren was earning a six-figure income by age eighteen, more than a million dollars a year by age twenty-four, and owned a company producing $50 million a year in revenue by age twenty-seven. He has mentored thousands of entrepreneurs, advised many large corporations, and serves on the board of several companies and nonprofit organizations.

Now, as publisher and editorial director of SUCCESS magazine, Darren interviews leading experts on human performance and achievement, as well as many of today's top CEOs, revolutionary entrepreneurs, superstar athletes, entertainers, and Olympic champions, to uncover and share the secrets behind their extraordinary success.

Darren is a popular keynote speaker and appears regularly on national radio and television shows for CNBC, MSNBC, CBS, ABC, and FOX. 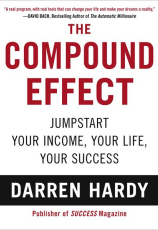 The Compound Effect: Jumpstart Your Income, Your Life, Your Success