Susan Nolen-Hoeksema, Ph.D., is a professor of psychology at Yale University. She has been conducting research on women's mental health for twenty years. The former director of the Institute for Research on Women and Gender at the University of Michigan, Nolen-Hoeksema was awarded the Leadership Award and Early Career Award by the American Psychological Association and received an Excellence in Research Award from the University of Michigan. She lives in Connecticut with her husband and young son. 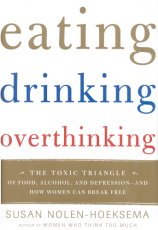 Eating Drinking, Overthinking: The Toxic Triangle of Food, Alcohol, and Depression -- and How Women Can Break Free