Arianna Huffington has written eleven widely praised books, appeared on numerous television and radio shows, and founded the Huffington Post, an enormously successful online source of news and opinion. In 2006 she was chosen as one of Time magazine's "100 Most Influential People in the World." She wrote this book for her two daughters, in the hope that they will lead fearless lives. 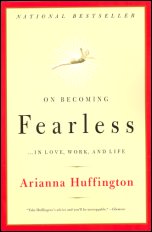 On Becoming Fearless . . . in Love, Work, and Life