Nick Kochan is a professional writer, journalist, and financial researcher. He has written extensively on banking, bank fraud, business crime, politics, and intelligence matters. He is a columnist and contributor to many U.K. and international newspapers and magazines, including the Financial Times and The Economist.

Kochan is an accomplished broadcaster, regularly appearing on the BBC television and radio in the United Kingdom. He has addressed many conferences and business gatherings on his specialist topics and is an experienced public speaker. He has also served as a consultant to a number of United Kingdom and international corporations on political and economic risk.

Kochan was educated at Fitzwilliam College, in the University of Cambridge. He has written books about a number of financial scandals, including the collapsed Bank of Credit and Commerce International and The Guinness Affair. He wrote a report for The Economist Intelligence Unit about Corporate Government. Kochan has also written the biography of the British Chancellor of the Exchequer, Gordon Brown.

Nick Kochan lives in London and has two children. 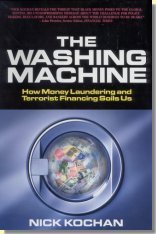 The Washing Machine: How Money Laundering and Terrorist Financing Soils Us