Steve Leveen is the CEO and co-founder of Levenger, which began as a catalog offering "tools for serious readers." But he readily admits that he himself was late to the bookshelf. It has only been in the past few years that he's considered himself a serious reader. In his Little Guide, he combines the best practices of accomplished readers over the centuries with successful methods of readers today to show you how to live your well-read life.

Steve is a graduate of the University of California in San Diego, his hometown. He earned both master's and doctoral degrees in sociology from Cornell  University. He and his wife, Lori, live with their two sons, their German shorthair pointer, and an ever-expanding Living Library in Delray Beach, Florida. 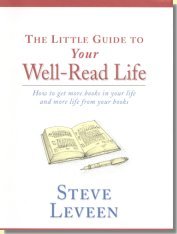 The Little Guide to Your Well-Read Life: How to Get More Books in Your Life and More Life From Your Books