Dr. Frank Luntz was named the "hottest pollster in America" by the Boston Globe, and "has a special expertise, on that happens to be in demand these days," according to The New York Times. He is sought by CEOs of Fortune 100 companies, political candidates, public advocacy groups, and world leaders -- just about anyone who wants to know how to say things better and more effectively. Dr. Luntz has supervised more than 1,200 surveys and focus groups in twenty countries, and has engineered some of the most potent political and corporate campaigns of the last decade. 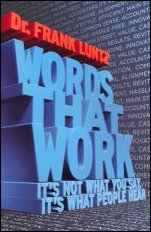 Words That Work: It's Not What You Say, It's What People Hear