Stephen T. McClellan CFA, is a former Wall Street investment analyst with 32 years of experience covering high-tech stocks. He spent 18 years as First VP at Merrill Lynch and eight years as VP at Salomon Brothers. McClellan has ranked on the Institutional Investor All-American Research Team for 19 straight years and on the Wall Street Journal Poll for seven years. He is in the Journal's Analysts Hall of Fame.

McClellan is former President of the Computer Industry Analyst Group and the Software/Services Analyst Group. He has been a guest on CBS, CNN, CNBC, and Wall $treet Week and has presented to many leading technology companies including IBM, Apple, ADP, and EDS. He is the author of the national best-seller The Coming Computer Industry Shakeout: Winners, Losers, and Survivors, and his work has also been published in The New York Times, Financial Times, Forbes, and other leading publications.

He holds an MBA in Finance from George Washington University and resides in San Francisco with his wife, Elizabeth Barlow, an artist. 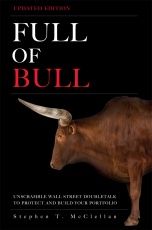 Full of Bull: Unscramble Wall Street Doubletalk to Protect and Build Your Portfolio