Mitzi Perdue, author of Tough Man, Tender Chicken: Business and Life Lessons from Frank Perdue, holds a bachelor's degree in government from Harvard University and a master's in public administration from George Washington University. For two decades she was a syndicated columnist, first for Capitol News, writing about food and agriculture, and then for Scripps Howard, writing about the environment. She has a lifelong interest in business and success, having watched how her father, Ernest Henderson, along with his business partner, Robert Moore, founded and built the Sheraton Hotel chain. She was a commissioner on the U.S. National Commission on Libraries and Information Science and a past president of American AgriWomen, the oldest and largest American farm women's organization. She spent decades growing rice in California, and when Frank and Mitzi met, they decided that chicken and rice go well together. 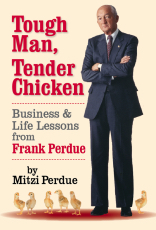