Dr. Siegel, who prefers to be called Bernie, was born in Brooklyn, NY. He attended Colgate University and Cornell University Medical College where he graduated with honors. His surgical training took place at Yale New Haven Hospital, West Haven Veteran's Hospital, and the Children's Hospital of Pittsburgh. He is a former president of the American Holistic Medicine Association. In 1989 he retired from the practice of general and pediatric surgery to travel around the world, speaking to patients and their caregivers.

For many, Bernie needs no introduction as he has already touched many lives. In the late seventies he began talking about patient empowerment and the choice to live fully and die in peace. As a physician, who has cared for and counseled innumerable people whose mortality has been threatened by an illness, Bernie embraces a philosophy of living and dying that stands at the forefront of the medical ethics and spiritual issues our society grapples with today. In 1978, he originated Exceptional Cancer Patients, (http://ecap-online.org) a specific form of individual and group therapy utilizing patients' drawings, dreams, images, and feelings.

His first book, Love, Medicine & Miracles was published in 1986. This multi-million selling book was an 'event' that redirected his life. It was followed by Peace, Love & Healing and How to Live Between Office Visits. Bernie's realization that we all need help dealing with the difficulties of life, not just the physical ones, led to the writing of his fourth book Prescriptions for Living. Many books followed including, Help Me to Heal, 365 Prescriptions for the Soul and 101 Exercises for the Soul. The debut of Bernie's first children's book, Smudge Bunny was followed by his latest book for parents entitled Love, Magic & Mudpies -- Raising Your Kids to Feel Loved, Be Kind, and Make a Difference. Faith, Hope, and Joy -- The Unexpected Side Effects of Cancer will be released early in 2009.

Bernie and his wife and coworker, Bobbie, live in a suburb of New Haven, Connecticut. They have five children and eight grandchildren. Bernie and Bobbie have co-authored their children, books, and articles. Their home, with its many children, pets and interests, often resembles a cross between a family art gallery, museum, zoo, and automobile repair shop. Bernie continues to pursue the breaking of new ground in the field of healing and personal growth, and to live and spread the message of kindness and love.

Mari Gayatri Stein's insightful words and drawings have delighted readers for over twenty years. Her whimsical illustrations and articles have been published in numerous collaborative book efforts, magazines, newspapers and journals. Seven of her highly acclaimed books were both written and illustrated by Mari. Her recent books, Unleashing Your Inner Dog: Your Best Friend's Guide to Life and The Buddha Smiles are stories about love, spirit and heart, doused with humor, irony and hope.

Mari lives with her husband and their two canine companions on an organic farm and bamboo sanctuary in the Northwest. She teaches yoga and meditation, has created a new line of whimsical greeting cards, a soon to be released picture book, entitled Puddle Moon, and is goofy-in-love when it comes to animals of all kinds. 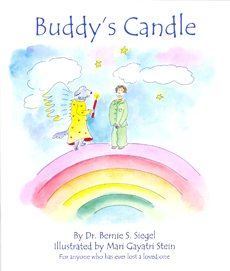 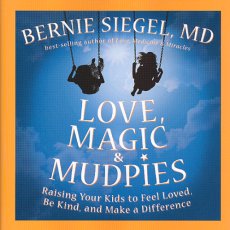 Love, Magic & Mudpies: Raising Your Kids to Feel Loved, Be Kind, and Make a Difference