Peter Singer is a professor of bioethics at Princeton University's Center for Human Values. He first became well known internationally after the publication of Animal Liberation in 1975. In 2005, Time magazine named him one of the world's 100 most influential people.

Jim Mason is the coauthor of Animal Factories (with Peter Singer) and the author of An Unnatural Order: Why We Are Destroying the Planet and Each Other, which John Robbins, author of the best-selling Diet for a New America, calls "a wonderful and important book." He is also an attorney and the fifth generation of a Missouri farming family. 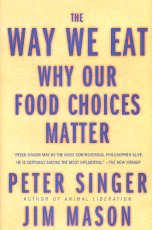 The Way We Eat: Why Our Food Choices Matter