Noah St. John, Ph.D., is founder and CEO of SuccessClinic.com, an international success training company, and host of WealthyFunTV. People and organizations in more than forty countries are using his breakthrough methods to get rid of their "head trash" and enjoy more control, freedom, and abundance in their lives and careers. He is the author of Permission to Succeed® and The Great Little Book of Afformations®, which have been translated into four languages. He has appeared on CNN, ABC, NBC, CBS, and Fox News, and been featured in PARADE, Woman's Day, Modern Bride, Los Angeles Business Journal, the Chicago Sun-Times, the Washington Post, InStyle magazine, and Selling Power. 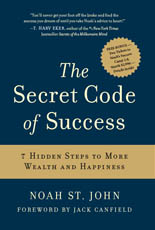 The Secret Code of Success: 7 Hidden Steps to More Wealth and Happiness