At the Olympic Winter Games in Nagano, Japan, Nikki Stone became America’s first-ever Olympic champion in the sport of aerial skiing. What made this performance so unbelievable was the fact that, less than two years earlier, a chronic spinal injury prevented her from standing, much less walking or skiing off a twelve-foot-tall snow jump that launches aerialists fifty feet into the air. She overcame the injury and went on to earn 35 World Cup medals, 11 World Cup titles, 4 national titles, 3 World Cup titles, a World Championship title, and membership in the Ski Hall of Fame. 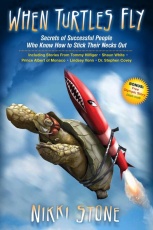 When Turtles Fly: Secrets of Successful People Who Know How to Stick Their Necks Out