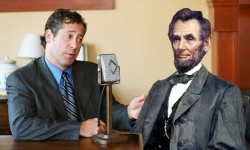 
Michael A. Stusser is a Seattle-based writer and game inventor. His "Accidental Parent" column (ParentMap magazine) recently won the prestigious Gold Award from the Parenting Publications of America. Stusser is a contributing writer for mental_floss and Seattle Magazine, and his work is frequently published by Law & Politics, Yoga International Magazine, and Go World Travel Magazine.

Stusser is also the cocreator of The Doonesbury Game with Garry Trudeau (winner for "Best Party Game of the Year," GAMES magazine, 1994); EARTHALERT, The Active Environmental Game; and Hear Me Out.

The Dead Guy Interviews: Conversations with 45 of the Most Accomplished, Notorious, and Deceased Personalities in History