Elliot Aronson is one of the most distinguished social psychologists in the world. His books include The Social Animal and The Jigsaw Classroom. Chosen by his peers as one of the 100 most influential psychologists of the twentieth century, he was elected to the American Academy of Arts and Sciences and is the only psychologist to have won all three of the American Psychological Association's top awards -- for writing, teaching, and research. He lives in Santa Cruz, California. 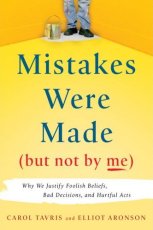 Mistakes Were Made (But Not by Me): Why We Justify Foolish Beliefs, Bad Decisions, and Hurtful Acts