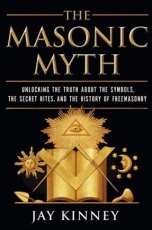 The Masonic Myth: Unlocking the Truth About the Symbols, the Secret Rites, and the History of Freemasonry

Freemasons have been connected to the all-seeing eye on the dollar bill, the French Revolution, the Knights Templar, and the pyramids of Egypt. They have been rumored to be everything from a cabal of elite power brokers ruling the world to a covert network of occultists and pagans intent on creating a new world order, to a millennia-old brotherhood perpetuating ancient wisdom through esoteric teachings. Their secret symbols, rituals and organization have remained shrouded for centuries and spawned theory after theory. The Masonic Myth sets the record straight about the Freemasons and reveals a truth that is far more compelling than the myths.

Reviews:
"The excitement of a thriller with the benefit of being factual. This is real-life (as opposed to 'reality') Freemasonry. And it's a great story!"
--Jim Tresner, 33°, Grand Cross, book review editor, The Scottish Rite Journal

"There has been a definite surge of curiosity and interest in Freemasonry, and, along with it, a profusion of ideas as to its purpose and motives. Jay Kinney, a well-known writer and researcher in esoteric traditions, and a Freemason, is an author the reader can trust to deliver a balanced perspective on things that often seem hidden."
--Robert G. Davis, 33°, Grand Cross