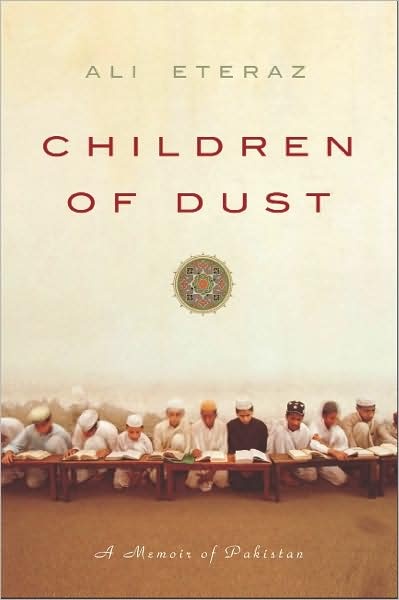 Children of Dust: A Memoir of Pakistan

Ali Eteraz's Children of Dust is a spellbinding portrayal of a life that few Americans can imagine. From his schooling in a madrassa in Pakistan to his teenage years as a Muslim American in the Bible Belt, and back to Pakistan to find a pious Muslim wife, this lyrical, penetrating saga from a brilliant new literary voice captures the heart of our universal quest for identity.

Children of Dust begins in rural Islam at the lowest levels of Pakistani society in the turbulent eighties. This intimate portrayal of rustic village life is revealed through a young boy's eyes as he discovers magic, women, and friendship.

After immigrating with his family to the United States, Eteraz struggles to be a normal American teenager under the rules of a strict Muslim household.

In 1999, he returns to Pakistan to find the villages of his youth dominated by the ideology of the Taliban, filled with young men spouting militant rhetoric, and his extended family under threat. Eteraz becomes the target of a mysterious abduction plot when he is purported to be a CIA agent, and eventually has to escape under military escort.

Back in the United States, with his fundamentalist illusions now shattered, Eteraz tries to find a middle way within American Islam. At each stage of Eteraz's life, he takes on a different identity to signal his evolution. From being pledged to Islam in Mecca as an infant, through Salafi fundamentalism, to liberal reformer, Eteraz desperately struggles to come to terms with being a Pakistani and a Muslim.

Astonishingly honest, darkly comic, and beautifully told, Children of Dust is an extraordinary adventure that reveals the diversity of Islamic beliefs, the vastness of the Pakistani diaspora, and the very human search for home.

Reviews:
"Wildly entertaining, Children of Dust is memoir of the first order, as genuinely American as Muslim, unraveling the perilous mystery that is modern Pakistan as only memoir can. Unlike others, Eteraz has truly 'been there,' and we are all the better for it."
--Murad Kalam, author of Night Journey

"In Children of Dust we follow the journey of a soul determined to reconcile the many worlds that live inside the author. In a time rife with cultural misinterpretations and generalizations, sensitive accounts such as this are invaluable assets."
--Laleh Khadivi, novelist, author of The Age of Orphans

"The gripping story of a young man exposed to both the beauty and ugliness of religion."
--Laila Lalami, author of Secret Son

"A love letter to one man's fading faith, Children of Dust is a gift and a necessity, and should be read by believers and nonbelievers alike. It is sure to deepen our collective conversation about religion and reason, loyalty and universality, and our geopolitical aims. Lucky then that it's also just plain fun to read."
--Yael Goldstein Love, author of Overture: A Novel and The Passion of Tasha Darsk