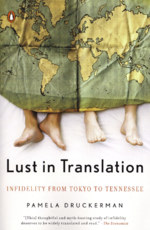 Lust in Translation: Infidelity from Tokyo to Tennessee

You probably already suspect that Americans are uniquely conflicted about adultery, but did you know:


Former journalist Pamela Druckerman interviewed psychologists, sex researchers, marriage counselors, and adulterers of all nations and concludes that Americans are, indeed, the least adept at having affairs, have the most trouble enjoying them, and suffer the most in the aftermath. Lust in Translation is her funny and fact-filled world tour of infidelity that will give whole new meaning to the phrase "practicing monogamy."

"[This] thoughtful and myth-busting study of infidelity deserves to be widely translated and read . . . [Druckerman's] finely calibrated moral compass is matched by a reporter's knack for deft, understated description."
--The Economist

"Entertaining and suggestive . . . Druckerman has a talent for crafting sly, taut sentences . . . Lively and readable."
--Bookslut.com

"Eye-opening . . . Overall, it's a light and entertaining read, but still smart and insightful. Like the best office gossip."
--Colorado Springs Independent

"Druckerman interviews cheaters, sexologists, marriage counselors and 'relationship entrepreneurs' from France to China and comes up with a delightful look at different societies. "
--The San Diego Union-Tribune

"It's funny, it's compulsive, it's surprising, it's the million soap operas that make up other people's love lives."
--The Observer (London)

''This engagingly written, intellectually provocative book is sure to be hotly debated by special-interest groups and individuals who think they know what's best for everybody else."
--Booklist

"Deliciously entertaining. In her witty and eye-opening debut, Druckerman takes the reader on a global romp that breezily punctures American sanctimony while dishing up cultural secrets. All the fun of an illicit affair with none of the guilt."
--Elisabeth Eaves, author of Bare: The Naked Truth About Stripping

"This is a wonderful book -- highly readable and filled with provocative insights drawn from the author's own keenly observed experiences and the scholarly literature. Lust in Translation gives us fascinating glimpses into how different cultures approach the concept of fidelity. Ultimately, Druckerman forces us to acknowledge that, while there may well be an 'international language of love,' it seems to have many dialects."
--Hella Winston, author of Unchosen