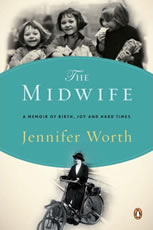 The Midwife: A Memoir of Birth, Joy and Hard Times

An unforgettable story of motherhood, the bravery of a community, and the strength of remarkable and inspiring women.

At the age of twenty-two, Jennifer Worth leaves her comfortable home to move into a convent and become a midwife to postwar London's East End slums. The colorful characters she meets while delivering babies -- from the plucky, warmhearted nuns with whom she lives, to the woman with twenty-four children, to the prostitutes and dockers of the city's seedier side -- illuminate a fascinating time in history. Beautifully written and utterly moving, The Midwife will touch the hearts of anyone who is, and everyone who has, a mother.

Reviews:
"Readers will fall in love with The Midwife, a richly drawn chronicle . . . An affirmation of life during the best and worst of times, and a celebration of the relentless drama and awe-inspiring magic of birth."
--Elizabeth Brundage, author of The Doctor's Wife

"Jennifer Worth's memories of her years as a midwife were at once hilarious and tremendously moving."
--Ayelet Waldman, author of Love and Other Impossible Pursuits

"Worth is indeed a natural storyteller. . . . Her detailed account of being a midwife in London's East End is gripping, moving, and convincing from beginning to end."
--Literary Review

"An amazing if at times gut-wrenching read . . . a detailed trip into history which may raise a few tears and many eyebrows."
--Warwickshire Telegraph

"Worth is indeed a natural storyteller -- in the best sense of the term, with apparent artlessness in fact concealing high art -- and her detailed account of being a midwife in London's East End is gripping, moving, and convincing from beginning to end. . . .  [The Midwife] is also a powerful evocation of a long-gone world  . . .  and in Worth it has surely found one of its best chroniclers."
--David Kynaston, Literary Review
"A chilling inisight into life for the average mother [in the 1950s]."
--Sunday Express
"Worth is a stylish and dramatic writer."
--Matthew Parris, Spectator

"This delightful memoir brings to vivid life London's East End . . . full of humor . . . Worth's talent shines from every page."
--Sainsbury's Magazine
"In her marvelous new book . . . there are desperately sad stories here, but tales of great hope too. Of ordinary people living, giving birth and building their families despite enormous hardship and poor sanitation. And of midwives delivering superb care in the toughest conditions."
--East End Life

"Nobody who reads [The Midwife] will ever forget it."
--The Woman Writer

"The Docklands in London's East End in the 1950s seems more like the nineteenth century than fifty years ago."
--Good Book Guide