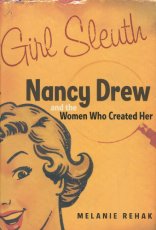 Girl Sleuth: Nancy Drew and the Women Who Created Her

In 1930 a plucky girl detective stepped out of her shiny blue roadster, dressed in a smart tweed suit, ready to restore a stolen inheritance to its rightful owner. Later, tied up by the villains, she managed to free herself and bring them to justice -- all while wearing a pencil skirt and high heels. Eighty million books later, Nancy Drew has survived the Depression, World War II,  and the sixties (when she was taken up with a vengeance by women's libbers), and emerged as beloved by girls today as she was by their grandmothers. Now, in a narrative with all the fast-paced thrill of one of Nancy's adventures, Melanie Rehak solves a page-turning literary mystery: Who created Nancy Drew? And how did she go from pulp heroine to American icon?

With ebullience, wit, and a wealth of little-known source material, Rehak weaves a behind-the-scenes history of Nancy and her groundbreaking creators. Taking us from The Secret of the Old Clock to Secret of the Spa, Rehak tells all about our fearless sleuth -- including the fact that both Nancy and her "author," Carolyn Keene, were invented by Edward Stratemeyer, a dime-novel genius who also created the Bobbsey Twins and the Hardy Boys. But Nancy Drew was actually brought to life by two remarkable women: original author Mildred Wirt Benson, a convention-flouting Midwestern journalist, and Harriet Stratemeyer Adams, a wife and mother who transformed herself into a CEO to run her father's company after he died. Together, Benson and Adams created a character that has inspired generations of girls to be as strong-willed and as bold as they were.

Melanie Rehak will send you back to your old Nancy Drews -- but thanks to Girl Sleuth you'll never read them the same way again.

Reviews:
"Rehak sheds light on perhaps the most successful writing franchise of all time and also the cultural and historic changes through which it passed. Grab your flashlights, girls. The mystery of Carolyn Keene is about to begin."
--Karen Joy Fowler, author of The Jane Austen Book Club

"Witty, fast-paced, and smart, Girl Sleuth makes the story behind Nancy Drew as much fun to read as the mystery novels themselves. It's superb."
--Jean Strouse, author of Morgan, American Financier