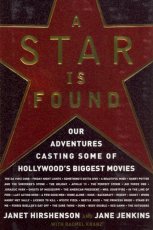 A Star Is Found: Our Adventures Casting Some of Hollywood's Biggest Movies

For anyone who's ever wondered how the Princess Bride ended up with an English accent or what Julia Roberts wore to the audition for her first major role -- or for anyone who's ever walked out of a movie saying "I would never have put that guy in that part" -- here is a first-of-its-kind look at how actors are chosen and careers are born.

Two of the top casting directors in the business, who have cast everyone from the Harry Potter kids to the new James Bond, offer an insider's tour of their crucial craft -- spotting stars in the making. Recounting their remarkable shared career that started at Francis Ford Coppola's Zoetrope studio, Janet and Jane tell the funny and fascinating stories of discovering and casting then-unknown stars like Julia Roberts, Tom Cruise, Leonardo DiCaprio, John Cusack, Matt Damon, Winona Ryder, Jennifer Connelly, Brendan Frasier, Virginia Madsen, Joaquin Phoenix, Meg Ryan and Benicio Del Toro, as well as share insights about the many famous directors for whom they've worked. Taking us from the first casting call through head shots, auditions, meetings, and desperate searches to fill a part, A Star Is Found gives readers behind-the-scenes access to the machinery of star-making.

Reviews:
"If you want to know what goes through the mind of a filmmaker or casting director when actors are actually vying for roles and crucial decisions are being made, this engaging, insightful book will be an eye opener. Jane Jenkins and Janet Hirshenson are among the all-time greatest casting directors in Hollywood."
--Ron Howard, director of A Beautiful Mind

"Janet and Jane are responsible for discovering many of today's greatest screen actors. Their brilliant new book provides us with a true insider's view of the casting of a film. A Star Is Found should be required reading for every student of cinema."
--Chris Columbus, director of Harry Potter and the Sorcerer's Stone

"Casting can be absurdly complicated, or it can be fun, but through the entire process you better hope you have someone like Jane and Janet by your side. They make it work -- and they've lived to tell the entertaining tale."
--Wolfgang Peterson, director of The Perfect Storm

"When auditioning, more often than not, actors feel like they have been sent to the principal's office. But Jane and Janet always wanted me to be the best that I could be, and that made all the difference. So many actors I know will say the same thing about these two amazing and intuitive women. And we all wish there were more like them."
--Virginia Madsen