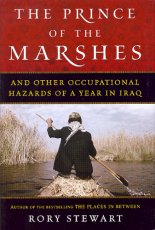 The Prince of the Marshes: And Other Occupational Hazards of a Year in Iraq

In August 2003, at the age of thirty, Rory Stewart took a taxi from Jordan to Baghdad. A Farsi-speaking British diplomat who had recently completed an epic walk from Turkey to Bangladesh, he was soon appointed deputy governor of Amara and then Nasiriyah, provinces in the remote, impoverished marsh regions of southern Iraq. He spent the next eleven months negotiating hostage releases, holding elections, and splicing together some semblance of an infrastructure for a population of millions teetering on the brink of civil war.

The Prince of Marshes tells the story of Stewart's year. As a participant he takes us inside the occupation and beyond the Green Zone, introducing us to a colorful cast of Iraqis and reveling the complexity and fragility of a society we struggle to understand. By turns funny and harrowing, moving and incisive, it amounts to a unique portrait of heroism and the tragedy that intervention inevitably courts in the modern age.

Reviews:
"No one understands the tragedy of the occupation of Iraq better than Rory Stewart. He was there, and he writes about his experiences as an administrator in southern Iraq with humor, verve, and deep insight."
--Michael Ignatieff, author of The Lesser Evil

"A work of great candor and courage, it conveys an unforgettable picture of the complexities of modern Iraq."
--Colin Thubron, author of Among the Russians

"Rory Stewart has written a brilliant, evocative account of what it's like to 'govern Iraq' in a post-imperial age. It is all the more impressive because he refrains from judgment, leaving readers to draw their own conclusions about the wisdom of the cause he served."
--Robert Skidelsky, author of John Maynard Keynes

"Stewart is the first official with the Coalition to actually give us a window into how the Occupation was lived -- and how Iraqi trust was lost. He gives us an essential glimpse of cultural cleavages too wide to breach and good intentions gone awry, reminding us of what the American and British occupiers failed to grasp: that all politics are local."
--Samantha Power, author of A Problem from Hell: America and the Age of Genocide

"The Prince of Marshes perfectly captures the topsy-turvy of post-invasion Iraq. It is a funny, humane, brilliantly observed, beautifully written narrative that should set the standard for a new generation of colonial literature."
--William Langewiesche, author of The Outlaw Sea and American Ground

"Rory Stewart's book is a wonderful piece of work. It made me laugh, it made me sad, and it made me angry. Stewart takes to the task of governance and the task of writing about it with delight in action -- engaging with, fighting with, trying to work with, trying to be the man that he is among that which is normally painted as The Other. This balance of poetic and contemplative, tragic and comic, strikes gut and brain at once."
--James Meek, author of The People's Act of Love