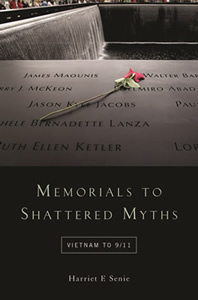 Memorials to Shattered Myths: Vietnam to 9/11

Memorials to Shattered Myths: Vietnam to 9/11 traces the evolution and consequences of a new hybrid paradigm, which grants a heroic status to victims of national tragedies, and by extension to their families, thereby creating a class of privileged participants in the permanent memorial process. Harriet F. Senie suggests that instead the victims' families be able to determine the nature of an interim memorial, one that addresses their needs in the critical time between the murder of their loved ones and the completion of the permanent memorial. She also observes that the memorials discussed herein are inadvertently based on strategies of diversion and denial that direct our attention away from actual events, and reframe tragedy as secular or religious triumph. In doing so, they camouflage history, and seen as an aggregate, they define a nation of victims, exactly the concept they and their accompanying celebratory narratives were apparently created to obscure.


"This richly informed account of recent memorials identifies a notable shift from honoring singular heroes to venerating the loss of civilian life. How this shift occurred and its national consequences are among the intriguing questions raised and answered in this landmark study."
-- Sally Webster, author of The Nation's First Monument and the Origins of the American Memorial Tradition

"What do we memorialize in America today, what-and who-is memorable? Harriet Senie's thoughtful and well researched book considers how many of the nation's contemporary memorials -- from the Vietnam Veterans Memorial to the September 11 National Memorial -- conflate violence and tragic loss with imperatives of collective unity and survival, denying the fissures in the American Dream and diverting Americans from imagining new and different futures."
-- Erika Doss, author of Memorial Mania: Public Feeling in America