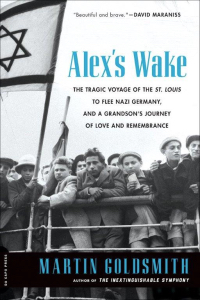 Alex's Wake: The Tragic Voyage of the St. Louis to Flee Nazi Germany -- and a Grandson's Journey of Love and Remembrance

Alex's Wake is a tale of two parallel journeys undertaken seven decades apart. In the spring of 1939, Alex and Helmut Goldschmidt were two of more than 900 Jewish refugees fleeing Nazi Germany aboard the St. Louis, "the saddest ship afloat" (New York Times). Turned away from Cuba, the United States, and Canada, the St. Louis returned to Europe, a stark symbol of the world's indifference to the gathering Holocaust. The Goldschmidts disembarked in France, where they spent the next three years in six different camps before being shipped to their deaths in Auschwitz.

In the spring of 2011, Alex's grandson, Martin Goldsmith, followed in his relatives' footsteps on a six-week journey of remembrance and hope, an irrational quest to reverse their fate and bring himself peace. Alex's Wake movingly recounts the detailed histories of the two journeys, the witnesses Martin encounters for whom the events of the past are a vivid part of a living present, and an intimate, honest attempt to overcome a tormented family legacy.

Reviews:
"Martin Goldsmith re-traveled the route of his grandfather and uncle, both lost to the Holocaust, through their internment in France to their horrid deaths at Auschwitz. He found therein a kind of personal deliverance from the guilt that clings so nastily to the survivor. The opposite of love, Elie Wiesel has observed, is not hate but indifference. With Alex's Wake, the author proves himself the least indifferent and, because of that, the most loving of men."
-- Chris Matthews, host of MSNBC's Hardball and author of Tip and the Gipper: When Politics Worked

"Alex's Wake is beautiful and brave. Martin Goldsmith's search for the truth is at once a chilling yet affirming account of human loss and recovery."
-- David Maraniss, author of They Marched into Sunlight

"There are six million Holocaust stories. All of them are the same in sadness and devastation. Each is different in circumstance and fear. Martin Goldsmith eloquently tells the story of his search for family in the rubble of memory and distance. It's a moving journey of finding the past and his own determined and compassionate present."
-- Susan Stamberg, National Public Radio

"Martin Goldsmith's odyssey brings clarity to a mystery and closure to a tragedy within his own family. By vividly -- and searingly -- personalizing the Holocaust, he has done a service to history and the collective conscience of humanity."
-- Strobe Talbott, president of the Brookings Institution and former Deputy Secretary of State

"A new perspective on the Holocaust . . . powerful and evocative"
-- New York Journal of Books

"Underscores the immense moral challenges and failings of a nation that believes itself the leader of the free world . . . A heartbreaking story of fear, frustration, anti-Semitism, and betrayal."
-- Baltimore Sun

"A child of persecuted German Jews remembers his tormented, perished forebears -- and makes peace with the country that hounded them to death . . . A well-researched, thorough reckoning of this shameful past."
-- Kirkus Reviews