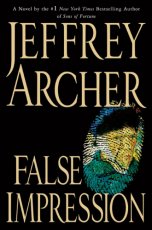 Why was an elegant lady brutally murdered the night before 9/11?

Why was a successful New York banker not surprised to receive a woman's left ear in the morning mail?

Why did a top Manhattan lawyer work only for one client, but never charge a fee?

Why did a young woman with a bright career steal a priceless Van Gogh painting?

Why was an Olympic gymnast paid a million dollars an assignment when she didn't have a bank account?

Why was an honors graduate working as a temporary secretary after inheriting a fortune?

Why was an English Countess ready to kill the banker, the lawyer, and the gymnast even if it meant spending the rest of her life in jail?

Why was a Japanese steel magnate happy to hand over $50 million to a woman he had only met once?

Why was a senior FBI agent trying to work out the connection between these eight apparently innocent individuals?

All these questions are answered in Jeffrey Archer's latest novel, False Impression, but not before a breathtaking journey of twists and turns that will take readers from New York to London to Bucharest and on to Tokyo, and finally to a sleepy English village, where the mystery of Van Gogh's last painting will finally be resolved.

And only then will readers discover that Van Gogh's Self-Portrait with Bandaged Ear has a secret of its own that acts as the final twist in this unforgettable yarn.

Reviews:
"Archer plots with skill, and keeps you turning the pages."
--The Boston Globe

"A storyteller in the class of Alexandre Dumas . . . Unsurpassed skill . . . making the reader wonder intensely what will happen next."
--The Washington Post