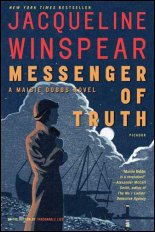 Maisie Dobbs Investigates the Mysterious Death of a Controversial Artist -- and World War I Veteran -- in the Fourth Installment of the Bestselling Series.

London, 1931. On the night before the opening of his new and much-anticipated exhibition at a famed Mayfair gallery, Nicholas Bassington-Hope falls to his death. The police declare the fall an accident, but the dead man's twin sister, Georgina, isn't convinced. When the authorities refuse to conduct further investigations and close the case, Georgina -- a journalist and infamous figure in her own right -- takes matters into her own hands, seeking out a fellow graduate from Girton College: Maisie Dobbs, psychologist and investigator.

The case soon takes Maisie to the desolate beaches of Dungeness in Kent, as well as the sinister underbelly of the city's art world. And while navigating her way into the heart of the aristocratic yet bohemian Bassington-Hopes, Maisie is deeply troubled by the tragedy of another, quite different family in need.

In Messenger of Truth, Maisie Dobbs again uncovers the dark legacy of the Great War in a society struggling to recollect itself in difficult times. But to solve the mystery of the artist's death, she will have to remain steady as the forces behind his fall come out of the shadows to silence her.

Following on the bestselling Pardonable Lies, Jacqueline Winspear delivers another vivid, thrilling, and utterly unique episode in the life of Maisie Dobbs.

Reviews:
"In Maisie Dobbs, Jacqueline Winspear has given us a real gift. Maisie Dobbs has not been created -- she has been discovered. Such people are always there among us, waiting for somebody like Ms. Winspear to come along and reveal them. And what a revelation it is!"
--Alexander McCall Smith

"A sleuth to treasure."
--The New York Times Book Review

"Intriguing . . . Maisie's most assured outing to date. As has been the case in all three books in the series, the mood and atmosphere of the period ring with authenticity, and the class tension that underlies many of Maisie's dealings lends the narrative extra sparkle."
--San Francisco Chronicle

"Her books are less whodunits than why-dunits, more P.D. James than Agatha Christie. Although the plots center on solving murders, the crimes are rooted in the turmoil and enormous social changes created by the First World War."
--USA Today

"A thrilling mystery that will enthrall fans of Jacqueline Winspear's heroine and likely win her new ones."
--Detroit Free Press