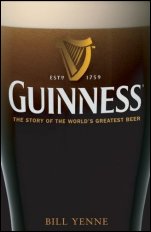 Guinness: The 250 Year Quest for the Perfect Pint

Guinness Stout has a unique place in global beverage folklore. It's a beer with a long and colorful history and mythology that maintains a passionate following among beer connoisseurs the world over. Indeed, two billion pints are poured and enjoyed around the world each year. Guinness is also a remarkable family of brewers and entrepreneurs whose story is worthy of legend, and whose name is an integral part of Irish history. In Guinness, famed beverage and beer writer Bill Yenne traces the 250-year history of Guinness, the entrepreneur patriarch, who became a brewer at age 30, to his son and namesake, who penned the recipe for the legendary black stout. And then there was the third generation Benjamin Lee Guinness, the First Earl of Iveagh, who became the richest man in Ireland selling stout, and who built the family business into the largest brewery in the world. In Guinness, Yenne carries the story through the centuries, up to the present, celebrating the technology and craftsmanship of the brewery today.