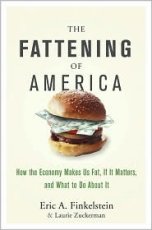 The Fattening of America: How The Economy Makes Us Fat, If It Matters, and What To Do About It

Eric A. Finkelstein and Laurie Zuckerman

Over two-thirds of Americans are overweight or obese. What's alarming about this statistic is not just the volume of Americans who have tipped their scales -- but the velocity at which they're doing it. Over the past three decades, the number of obese Americans has more than doubled. The increase occurred up and down the socioeconomic spectrum, for all racial and ethnic groups, and, most dramatically, for America's children.

What's behind the sudden, explosive rise in obesity rates? In a word, it's economics. Author Eric Finkelstein, a renowned health economist who has spent much of his career studying the economics of obesity, with the help of coauthor Laurie Zuckerman, reveals why America's growing waistline is a by-product of our economic and technological success. Because of declining food costs, especially for high-calorie, low-nutrient foods, and increasing usage of technology, which make Americans more sedentary, the environment has changed in such a way that we're eating more calories and burning off less.

The issue is not that Americans don't care about their increasing waistlines -- quite the opposite, in fact. But the reality is that in America's (and increasingly the world's) obesity-inducing environment, the sustained changes in behavior required to lose the weight and keep it off are simply too difficult -- and becoming more difficult all the time. Moreover, generous insurance coverage and vastly improved medical treatments have lowered the health costs, if not the monetary costs, of excess weight. So carrying a few extra pounds is not as bad for one's health as it used to be.

Finkelstein and Zuckerman blend theory, research, and engaging -- sometimes hilarious -- personal anecdotes to break down the causes and the consequences of America's obesity epidemic. One by one, they explore the media's claim that obesity is making our businesses less competitive, pushing good jobs overseas, hurting our military readiness, increasing our taxes, and helping to bankrupt the Medicare and Medicaid programs. Along the way, the authors also reveal how the obesity epidemic has spurred tremendous demand for all sorts of new products and services, creating a flourishing new market that they call "The ObesEconomy."

The Fattening of America outlines the issues we must deal with to confront obesity. The authors explore the role that business and policymakers play in America's obesity epidemic, and explain that successful obesity prevention strategies need to do exactly the opposite of where the economy is taking us. They need to make it cheaper and easier to be thin -- not fat. However, because obesity is a natural by-product of an expanding economy, the authors question whether or not obesity prevention efforts, even if successful, would actually leave some individuals worse off.

Reviews:
"Eric Finkelstein and Laurie Zuckerman show that our entire society profits from making people fat and then either keeping them fat or making them thin again. When you understand how these powerful forces work, you can do a better job of resisting them—and staying healthy."
--Jack Challem, bestselling author of The Food-Mood Solution and Stop Prediabetes Now

"Everyone who eats food in America must read this book. It is a comprehensive guide to how we've become the fattest nation on the planet and how the food industry, in cahoots with the government, makes us one of the least healthy nations."
--Fred Pescatore, MD, MPH, CCN, author of The Hamptons Diet

"The authors have done an excellent job talking to mainstream America about obesity. It brings together all of the latest research and packages it in a way that is engaging for the average person. I very much enjoyed the book and would recommend it for anyone interested in obesity. Well done."
--James O. Hill, PhD, Professor of Pediatrics and Medicine at the University of Colorado Health Sciences Center, and author of The Step Diet: Count Steps, Not Calories to Lose Weight and Keep It Off Forever

"The Fattening of America is an important book for everyone interested in gaining a better understanding of the underlying causes behind the obesity epidemic and options for addressing it."
--Barry Popkin, Carla Smith Chamblee Distinguished Professor of Global Nutrition at the University of North Carolina