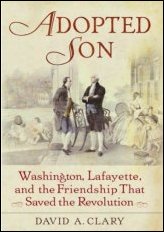 Adopted Son: Washington, Lafayette, and the Friendship That Saved the Revolution

In Adopted Son, historian David A. Clary tells the exciting story of possibly the most important friendship in American history. Bringing together the latest research, this dramatic narrative interweaves the private and public lives of George Washington and the Marquis de Lafayette, who did together what neither could have done alone.

They were unlikely comrades-in-arms. One was a self-taught, middle-aged Virginia planter in charge of a ragtag army of revolutionaries, the other a rich, glory-seeking teenage French aristocrat. But the childless Washington and the orphaned Lafayette forged a bond between them as strong as any between father and son. It was an unbreakable trust that saw them through betrayals, shifting political alliances, and the trials of war.

Lafayette came to America a rebellious youth whose defiance of his king made him a celebrity in France. His money and connections attracted the favor of the Continental Congress, which advised Washington to keep the exuberant Marquis from getting himself killed. But when the boy-general was wounded in his first battle, he became a hero of two countries. As the war ground on, Washington found in his young charge the makings of a courageous and talented commander whose loyalty, generosity, and eagerness to please his Commander in Chief made him one of the war's most effective and inspired generals. Lafayette's hounding of Cornwallis's army was the perfect demonstration of Washington's unconventional "bush-fighting" tactics, and led to the British surrender at Yorktown.

Using personal letters and other key historical documents, Adopted Son offers a rare glimpse of the American Revolution through the friendship between Washington and Lafayette. It offers dramatic accounts of battles and intimate portraits of such major figures as Alexander Hamilton, Benedict Arnold, and Benjamin Franklin. The result is a remarkable, little-known epic of friendship, revolution, and the birth of a nation.

"A fascinating account of the relationship between Washington, who lacked a son, and young Lafayette, who lacked a father. It was a warm, affectionate connection that was greatly satisfying to both men, one that significantly strengthened France's commitment to America during our War of Independence. This fine study deserves a wide readership."
--Don Higginbotham, author of The War of American Independence

"With verve and charm, David Clary shows how the childless Washington, who felt betrayed by many of the men who surrounded him, and Lafayette, who never knew his father and lusted for glory and the chance to help the American cause, drew close in a loving and trusting relationship. With his engaging style, Clary succeeds in bringing to life Lafayette and Washington, and also in acquainting readers with America's great, and at times seemingly forlorn, struggle for independence."
--John Ferling, author of A Leap in the Dark: The Struggle to Create the American Republic

"At long last we have the full story of how the Father of Our Country and his French 'adopted son,' the Marquis de Lafayette, joined hands across the Atlantic and on the battlefield, and together launched a new nation and a new age of democracy around the world."
--Arthur Herman, author of How the Scots Invented the Modern World

"A riveting history of a tumultuous time in America and France . . . I loved this book."
--Senator Kay Bailey Hutchison, author of American Heroines: The Spirited Women Who Shaped Our Country