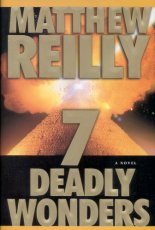 Matthew Reilly, the New York Times bestselling author and "pedal-to-the-metal action novelist" (Publishers Weekly), is back in high gear on the greatest treasure hunt of all time -- a headlong race to find the Seven Wonders of the Ancient World.

The Golden Capstone that once stood atop the Great Pyramid at Giza offered protection from the global flooding and scorching sun that occurs every 4,500 years due to the dreaded Tartarus Rotation solar event. All that changed when Alexander the Great broke the Capstone into seven pieces and hid them in the greatest structures of the age: the Seven Wonders of the Ancient World. Now, in 2006, the Tartarus Rotation is about to come again, and it is said that whoever places the Capstone on the pyramid at the time of the Rotation will gain absolute earthly power for the next 1,000 years. Everyone wants the Capstone -- from the greatest, most powerful countries on earth to gangs of evil terrorists -- and one daring coalition of eight small nations who think that no single nation should possess such an awesome power source. And so this stalwart group, led by Australian supersoldier Captain Jack West Jr., enters the fray, on a global battlefield filled with booby-trapped mines, stupendous Ancient Wonders, gigantic evil forces, and an adventure beyond imagining.

Reviews:
"An absolute bone crusher of a thriller! Matthew Reilly is the king of hardcore action." --Brad Thor, national bestselling author of Blowback