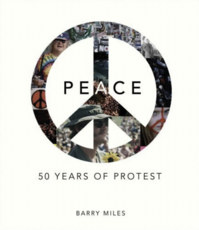 Everyone recognizes it. Wherever it's seen -- from lapel pins to bumper stickers to banners -- this familiar circle with its upside-down V makes an immediate anti-war, pro-harmony statement. Peace: 50 Years of Protest highlights the fascinating and eventful history of this well-known symbol. This riveting retrospective features . . .


Using a combination of research and personal recall, author Barry Miles recounts the evolution of this symbol from the 1958-1960 Ban the Bomb mass marches right up to the present day.