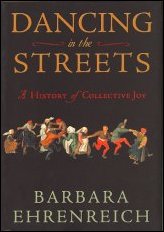 Dancing in the Streets: A History of Collective Joy

From the Bestselling Social Commentator and Cultural Historian, a Fascinating Exploration of One of Humanity's Oldest Traditions:
The Celebration of Communal Joy

In the highly acclaimed Blood Rites, Barbara Ehrenreich delved into the origins of our species' attraction to war. Here, she explores the opposite human inclination, one that is equally universal and deep-rooted, yet has been so effectively suppressed that we lack even a convenient phrase for it: the desire for collective joy, expressed throughout the ages in ecstatic celebrations of feasting, costuming, and dancing.

Drawing on a wealth of history and anthropology, Ehrenreich uncovers the deep origins of communal revelry in human biology and culture. Although Europeans from the sixteenth century onward viewed mass festivities as foreign and "savage" Ehrenreich shows that they were in fact indigenous to the West, from the ancient Greeks' worship of Dionysus to the medieval practice of Christianity as a "danced religion." Ultimately, church officials succeeded in driving the festivities out of the churches and into the streets (where they became "carnival"). Following the same pattern of repression, Reformation Protestants criminalized carnival, Wahhabist Muslims battled ecstatic Sufism, and European colonizers wiped out native danced rituals. Elite fears that collective festivities would undermine social hierarchies were not entirely unjustified: the festive tradition inspired French revolutionary crowds and countless uprisings of slaves and colonized peoples from the Caribbean to West Africa to the American plains.

Yet a tradition so deeply ingrained is not easy to annihilate, Ehrenreich argues, pointing to recent outbreaks of group revelry, from the rock 'n' roll rebellion of the 1950s-'60s to the "carnivalization" of sports events in the 1980s-'90s. Original, exhilarating, and profoundly optimistic, Dancing in the Streets concludes that we are innately social beings, impelled almost instinctively to share our joy, and therefore able to envision, perhaps even create, a more peaceful future.

Reviews:
"Barbara Ehrenreich shows how and why people celebrate together, and equally what causes us to fear celebration. Here is the other side of ritual, whose dark side she explored in Blood Rites. Ranging in time from the earliest festivals depicted on cave walls to modern football crowds, Ehrenreich finds that dancing has been a way to address personal ills like melancholy and shame, and social ills as extreme as those faced by American slaves. Dancing in the Streets is itself a celebration of language -- clear, funny, unpredictable. This is truly an original book."
--Richard Sennett, author of The Culture of the New Capitalism

"A fabulous book on carnival and ecstasy, skillfully arranged and brilliantly explained."
--Robert Farris Thompson, author of Tango: The Art History of Love

"The same brave, brilliant writing that Ehrenreich has always used to expose the dark underside of human nature she now employs to illuminate sources of communal joy and bonding that we as a society have historically denied and continue to sweep under the rug. Tracing the long history of Europe's fight against its better impulses, she ends with the return of the repressed -- the rock rebellions of the 1960s, the carnivalesque that often pervades protest movements -- as she joyously draws ecstasy out of its hiding places and urges us to let it back into our lives."
--Wendy Doniger, author of The Woman Who Pretended to Be Who She Was