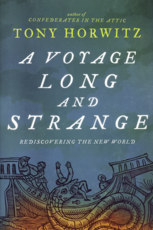 A Voyage Long and Strange: Rediscovering the New World

On a chance visit to Plymouth Rock, Tony Horwitz makes an unsettling discovery. A history buff since childhood, expensively educated at university -- a history major, no less! -- he's reached middle age with a third-grader's grasp of early America. In fact, he's mislaid more than a century of American history, the perioud separating Columbus's landing in 1492 from the arrival of English colonists at Jamestown in 160-something. Did nothing happen in between?

Horwitz decides to find out, and in A Voyage Long and Strange he uncovers the neglected story of America's founding by Europeans. He begins a thousand years ago, with the Vikings, and then tells the dramatic tale of conquistadors, castaways, French voyageurs, Moorish slaves, and many others who roamed and rampaged across half the states of the present-day U.S. continent, long before the Mayflower landed. These forgotten firstcomers sought grapes, gold, converts, even a cure for syphilis, and brought creatures, weapons, and germs unknown to natives of the New World. Though almost all failed, they wrote vividly of what they saw -- Zuni pueblos and buffalo plains, the Great Smokies and Grand Canyon, Atlantic dunes and Pacific fogs -- and left an enduring mark on the land and people encountered by late-arriving English settlers.

To explore this history and its legacy in the present, Horwitz embarks on an epic quest of his own -- trekking in search of grape-rich Vinland, Ponce de León's Fountain of Youth, Coronado's Cities of Gold, Walter Raleigh's Lost Colonists, and other mysteries of ear1y America. He joins Micmac Indians in a sub-Arctic sweat lodge and modern-day conquistadors who don helmets and armor in subtropical heat. He paddles the Mississippi and scales ancient mound cities. And everywhere he goes, Horwitz probes the revealing gap between fact and legend, between what we enshrine and what we forgot.

An irresistible blend of history, myth, and misadventure, A Voyage Long and Strange allows us to rediscover the New World for ourselves.

Reviews:
"This rattling good read is an eyes-open, humorously no-nonsense survey of complicated Americans."
--The New York Times Book Review, on Confederates in the Attic

"Hilariously funny."
--The Washington Post, on Confederates in the Attic

"In this sparkling book, Tony Horwitz freshens our culture of remembrance with humor and a sharpshooter's eye, exploding myths with the irreverence of a small boy hurling snowballs at a beaver hat."
--USA Today, on Confederates in the Attic

"No writer has better captured the heroic enigma that was Captain James Cook than Tony Horwitz in this amiable and enthralling excursion around the Pacific."
--Bill Bryson, on Blue Latitudes

"Blue Latitudes is a rollicking read that is also a sneaky work of scholarship, providing new and unexpected insights into the man who out-discovered Columbus. I inhaled it in one weekend."
--Nathaniel Philbrick