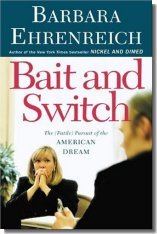 Bait and Switch: The (Futile) Pursuit of the American Dream

The bestselling author of Nickel and Dimed goes back undercover to do for America's ailing middle class what she did for the working poor.

Barbara Ehrenreich's Nickel and Dimed explored the lives of low-wage workers. Now, in Bait and Switch, she enters another hidden realm of the economy: the shadowy world of the white-collared unemployed. Armed with a new identity and a plausible résumé of a professional "in transition," she attempts to land a middle-class job -- undergoing career coaching and personality testing, then trawling a series of boot camps, job fairs, networking events, and evangelical job-search ministries. She gets an image makeover to prepare for the corporate world and works to project the winning attitude recommended for a successful job search. She is proselytized, scammed, lectured, and -- again and again -- rejected.

Bait and Switch highlights the people who've done everything right -- gotten college degrees, developed marketable skills, and built up impressive résumés -- yet have become repeatedly vulnerable to financial disaster, and not simply due to the vagaries of the business cycle. Today's ultralean corporations take pride in shedding their "surplus" employees -- plunging them, for months or years at a stretch, into the twilight zone of white-collar unemployment, where job-searching becomes a full-time job in itself. As Ehrenreich discovers, America's middle class is now the loser in a classic game of bait and switch, in which the promise of upward mobility and financial security has given way to a harsh reality of limited social supports for newly disposable workers -- and no guarantees even for those who have jobs.

Alternately hilarious and tragic, Bait and Switch, like the now-classic Nickel and Dimed, is a searing exposé of economic cruelty where we least expect it.

"A valuable and illuminating book . . . We have Barbara Ehrenreich to thank for bringing us the news of America's working poor so clearly and directly, and conveying with it a deep moral outrage . . . She is our premier reporter of the underside of capitalism." --Dorothy Gallagher, The New York Times Book Review

"I was absolutely knocked out by Barbra Ehrenreich's remarkable odyssey. She has accomplished what no contemporary writer has even attempted -- to be that 'nobody' who barely subsists on her essential labors. Not only is it must reading, but it's mesmeric. Bravo!" --Studs Terkel, author of Working

"A book that everyone -- yes, everyone -- ought to read, for enjoyment, for consciousness-raising, and as a call to action." --Steve Weinberg, Chicago Tribune