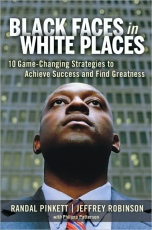 As an African American, you've heard the adage that you need to work twice as hard as white counterparts to succeed. So you play "the game" and anticipate being rewarded for your talents and hard work. Now you're up for a prized promotion, landmark business deal, or other professional breakthrough -- this is your moment. . . .

It's at this point that many African-American professionals experience a "black faces in white places" moment: a point at which it becomes all too clear that just playing well isn't enough -- because the rules can change on you in a heartbeat. This scenario plays out countless times each day in American workplaces, and for Randal Pinkett it played out on national television -- when Pinkett's seemingly storybook ending during the finale of The Apprentice was about to get an unexpected twist.

Black Faces in White Places is about that very game -- the one played in the competitive world in which we all live and work. While exploring the ideals and realities of identity, meritocracy, opportunity, and society, the book lays out ten concrete strategies to help you become a "game changer." The ten strategies will advance you to the next level of personal and professional success and unleash the greatness that lies within you.

Along the way, you will:

Based on interviews with dozens of prominent African Americans and the authors' considerable experience in business, in the public eye, and in the minority, Black Faces in White Places shows how as an African-American professional you can (and must) think and act both entrepreneurially and "intrapreneurially"; combine the strengths of your peers with the wisdom of others; and plant the seeds of a positive and lasting legacy.

Reviews:
"Randal Pinkett and Jeffrey Robinson's book has much to say about solutions to our challenges in the Age of Obama. Don't miss it!"
--Cornel West, Princeton University

"There are three types of people in this world: those who make the rules, those who follow the rules, and those who redefine the rules. Drs. Pinkett and Robinson have given us a revolutionary roadmap for people of color to accomplish the latter, and to do so in a way that benefits everyone."
--William H. Cosby, Jr., Ed.D., and Camille O. Cosby, Ed.D.

"An intriguing exploration into the personal, professional, and spiritual dimensions of being Black in 21st century America. If you care deeply about the future of our communities and our country, you should care about this book."
--Benjamin Todd Jealous, President and CEO, NAACP

"This book is a 'must read' to fully understand the Black experience in any professional setting. Black Faces in White Places takes a look at race and professional accomplishment in post-Obama America. Drs. Pinkett and Robinson interview entrepreneurs, corporate execs, educators, religious and community leaders to identify 10 clear strategies to be successful oneself -- and to help others as well."
--Soledad O'Brien, Anchor and Special Correspondent, CNN

"The '10 Game-Changing Strategies' in Black Faces in White Places are so powerful, so compelling, and so simple, it made me wonder why someone didn't think of them sooner! Thank you, Dr. Pinkett and Dr. Robinson."
--Judge Glenda Hatchett

"At last, a book that isn't narrowly focused on how to become 'successful.' Black Faces in White Places challenges each of us to look beyond our individual agendas and chart a course for 'greatness' -- a collective agenda of helping others, thus creating a ripple effect that is felt for generations and generations to come."
--Marc H. Morial, President and CEO, National Urban League