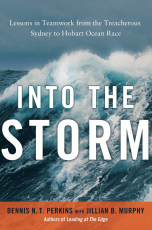 Into the Storm: Lessons in Teamwork from the Treacherous Sydney to Hobart Ocean Race

Hurricane-force winds howled, reaching speeds of over 100 miles an hour. Waves as tall as 8-story buildings dwarfed the 35-foot sailboat, AFR Midnight Rambler. Rain and spray pelted the sailors' faces like gravel, and the screaming of the wind made communication nearly impossible.

The boat would fly off the back of an enormous wave, and the Rambler would be suspended in midair -- then drop 30 feet or more. The impact, when it came, was like crashing into cement. Then the boat would be knocked down the face of a mountainous wave, and the crew would struggle to stay alive and avoid a fatal capsize.

No one said it aloud, but they all knew that they could die in the storm. Yet in spite of their paralyzing fear, the crew held together -- and they supported each other with remarkable teamwork.

Competing in the 1998 Sydney to Hobart Race -- one of the most dangerous offshore ocean races in history -- skipper Ed Psaltis and his amateur crew did more than survive the deadly storm. The AFR Midnight Rambler went on to become the overall winner of the race -- the smallest boat in 10 years to win the prestigious Tattersall's Cup.

How did they do it? What enabled the Midnight Rambler team to prevail against all odds? And what can your team learn from their experience?

Recounting a heart-stopping tale of incredible teamwork, Into the Storm reveals 10 critical strategies for Teamwork at The Edge -- as applicable in the workplace as on the high seas -- including:

Be willing to sail into the storm. The crew of the Rambler had a fundamental decision to make: Turn around and run for shelter, or head directly into the path of the storm. To be successful, teams must be open to taking bold action -- even though the best strategy may appear risky.

Find ways to share the helm. The crew organized a "wave spotter" system to block the spray and look ahead for approaching waves. Team members need to find places where they can add value -- and take the initiative to share the load.

Master the art of rapid recovery. Teams that press the upper limits of performance will inevitably have "knockdowns" and "broaches." The crew of AFR Midnight Rambler showed an extraordinary ability to shift from survival to racing mode. To be successful, all teams need to develop the capacity to recover from setbacks quickly.

A gripping tale of triumph over adversity, Into the Storm reveals how any group, working together, can achieve the seemingly impossible.

Into the Storm from FSB Associates