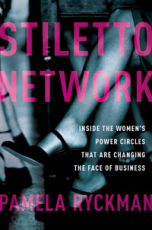 Stiletto Network: Inside the Women's Power Circles That Are Changing the Face of Business

Behind every great woman . . . are other great women!

In numbers never seen before, ambitious women are joining forces in every major American city, forming salons, dinner groups, and networking circles -- and collaborating to achieve clout and success. A new girls' network is alive and set to hyperdrive, and it's upending all the old rules about how power is allocated and business practiced.

Stiletto Network is an up-close and personal account of the groundswell of women's groups changing the face of business: the "Power Bitches," "Brazen Hussies" and "S.L.U.T.S." (Successful Ladies Under Tremendous Stress); and dozens more. It's about what happens when bright, caring women -- from captains of industry to aspiring entrepreneurs -- come together to celebrate and unwind, debate and compare notes. But it's also about what happens when they leave the table, when the talking stops and the action starts. You'll learn how they mine their collective wisdom to realize their dreams or champion a cause, how they lift up their friends and push them forward, ensuring each woman gets what she needs -- be it information, an introduction, a recommendation, a partnership, or a landmark deal.

You'll read about women such as Kim Moses, who created the most downloaded app in the history of Warner Bros. And Jennifer Nason, who oversaw the largest high-yield bond offering of 2010. And Mallun Yen, who joined the founding team of RPX, one of the fastest-growing start-ups in history, and steered it toward a $1 billion IPO. And Bonnie McElveen-Hunter and Melanie Sabelhaus, who created the most successful fundraising pilot in the history of the Red Cross. All of these movers and shakers were propelled by Stiletto Networks.

Stiletto Network is the first book to shed light on this groundbreaking movement. Sharing story after story of women banding together to help other women, the book's witty, compassionate, and revealing narrative serves as both an inspiring call to action and a fascinating inside look at the new networks that are reshaping the business world.


"The next revolution in business is the rise of the feminine archetype. When glamour, knowledge, and power team up, formidable forces arise that will disrupt Wall Street and commerce. This book is an important glimpse into the future."
-- Deepak Chopra

"Stiletto Network is inspiring for all women across the world and a must-read for entrepreneurs. It's a story of true friendships coming together to create powerful movements. Watch out! Friendships equal a silent force."
-- Angela Simmons, fashion designer/philanthropist/entrepreneur

"Pamela Ryckman is like Malcolm Gladwell – on women! Stiletto Network is fast-paced, engaging, and leaves no doubt that women are on the brink changing society forever."
-- Reshma Saujani, Founder of Girls Who Code

"Pamela Ryckman is onto something big. As I turned the pages, I recognized myself and the smart, fun women in my own stiletto groups who have been crucial to my life and work. This book will become a bible for working women of all stripes, but it's also a riveting read for anyone interested in how informal relationships have the power to change individuals and the world."
-- Marci Alboher, former New York Times columnist, Vice President Encore.org and author of The Encore Career Handbook

"Stiletto Network taps into fascinating new aspects of feminine leadership, delivering keen insights on a powerful movement that will no doubt make the world a better place. It exposes the 'Long Tail' of women's movements and is a must-read for men and women who are leaders in the making. This book will inspire you to think big and take action!"
-- Alessandra Lariu, CEO of Shout and Co-founder of SheSays

"Pamela Ryckman uses good old-fashioned storytelling to illuminate a moment in history where women are poised to make waves in business, politics, and philanthropy. An important read for men who want to know where the world is heading and want to understand the change(without feeling under attack)."
-- Michael Berman, President of The Duberstein Group, Inc. and coauthor of Living Large