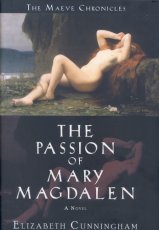 The Passion of Mary Magdalen: A Novel

"This is a passion story: my passion, his passion, ours -- yours."

The most provocative woman in the Gospels, Mary Magdalen makes only a few, dramatic appearances. You always knew there had to be more . . .

Make way for Maeve, the feisty, outspoken Celtic Magdalen, telling her own story, on her own terms. No one's disciple, she is lover, bard, priestess, healer. And like her beloved Jesus, Maeve incarnates the divine mystery of love -- in the flesh.

Flesh we first encounter stripped naked and displayed on a slave block in Rome. Born to warrior witches on an island in the Celtic Otherworld, raised to be a hero, Maeve is determined to find her lost beloved, a young man known to the Celts as Esus, whose life she once saved at enormous cost to herself. She has survived a shipwreck, trekked through the mountains of Celtic Iberia. Only an imperial power could slow this woman down.

Snapped up by an aristocratic madam, Maeve becomes not only an accomplished whore but also has a startling encounter with the goddess Isis, whose story of loss and longing affects Maeve deeply. A failed attempt at escape results in even more bitter slavery when Maeve is sold to a spoiled young matron with a terrible secret. Here in the house of her enemy, Maeve learns the healing mysteries that become the basis of her life -- and his. When Maeve lands in mortal trouble, priestesses, whores, matrons, and even Rome's chief Vestal Virgin must unite to bring about her rescue.

Free at last, Maeve goes straight to Palestine where she meets Mary of Bethany, a prickly would-be rabbinical scholar, and Ma (yes, his mother), a fey but autocratic matriarch. Neither one knows where Jesus is; he has vanished again. What is a girl to do but settle down in the good-time town of Magdala and open her own holy whore house, welcome each stranger as if he were a god -- until, at last, he is.

Equally strong-willed and charismatic, Maeve and Jesus form a union that is as stormy as it is ecstatic. Throughout the terrain of the Gospels -- its healings, exorcisms, miracles, feasting, riots, and terrifying prophecy -- the lovers fight and make love, comfort and confront each other, infusing this unique passion narrative with passion in all its meanings.

In this central novel of The Maeve Chronicles, acclaimed novelist Elizabeth Cunningham brings us a Mary Magdalen who defies all stereotypes -- old and new. Passionate and unrepentant, fierce and tender, Maeve leaps off the page, a luminous, embodied archetype for our time.

"Cunningham's Maeve is such a force of nature that we are swept along in her trail . . . she leads us to believe that, if there were a fated lover for the fated savior, it would certainly be this brilliant, soulful, combative Celtic lass . . . a powerful spiritually charged novel."
--Booklist

"Cunningham is like an American J.K. Rowling . . . creating a feminist Harry Potter fantasy on a religious theme."
--Episcopal Life

"A wondrous tale. Stands strongly among such classics as The Mists of Avalon."
--Library Journal

"I found it thrilling and inspiring to read Elizabeth Cunningham's retelling of the old familiar Gospel stories from a radically new and fresh perspective. Listening to her Magdalen remember the joys and sorrows of her life with Jesus moves all of us to search our souls deeply for what it means to love a  person, an idea, or a God."
--Tom Cowan, author of Yearning for the Wind: Celtic Reflections on Nature and the Soul

"The Passion of Mary Magdalen searches out, savors, and celebrates Mary's place in the religious and cultural imagination of the West. Elizabeth Cunningham's novel offers us a way to understand the relationship between the feminine and the divine, and points toward healing what has typically been the dichotomy between the two."
--Bruce Chilton, author of Mary Magdalene: A Biography and Rabbi Jesus

"We have seen quite a bit about Mary Magdalen recently, but very little that can match the living woman that Elizabeth Cunningham invokes. She does not drain Mary of her life by making her pious, or an intellectual symbol. In this Mary we get a woman we can believe in, a woman we celebrate, a woman we want to know. The Passion of Mary Magdalen is aptly named, on all levels."
--Rachel Pollack, author of Godmother Night

"A profound meditation on the alchemical significance of the union  between Jesus and Mary Magdalen. But don't let that scare you off. Cunningham's mouthy heroine, raucous wit, and astonishing plot turns make The Maeve Chronicles a treat. At once hilarious and deeply moving, this tour de force is guaranteed to keep you up well past your bedtime."
--Catherine MacCoun, author of Beyond the Abbey Gates

". . . long and rich and the epitome of the storyteller's art. It has characters you care about, enough history to magnetize the fantasies in place and time, and a little magic . . . It matters little what [the author] calls it as long as she gets on with writing the next volume."
--St. Louis Post-Dispatch on Daughter of the Shining Isles

"From the beginning we are caught up in a cocky irreverence that is captivating . . . Wrestling with destiny and the sense of conflict as all true heroines must, Maeve searches for the land of Mona and its famous Druid university. Once she is there, prophecies begin to fulfill themselves and we are swept into an adventure that tugs at our hearts and minds. This amazing book could well become a classic of women's literature."
--Booklist on Daughter of the Shining Isles

"High adventure; magic; a detailed look at the world of the ancient Druids; and the most engaging heroine of recent Goddess fiction come together to make Daughter of the Shining Isles a must-have for any lover of historical or Goddess-oriented fantasy."
--SageWoman

"If you're interested in Celtic or Christian lore, here are both, seamlessly interwoven, told in such a delightful narrative that it was difficult to put the book down."
--The Beltane Papers on Daughter of the Shining Isles

"This captivating novel measures the relationship between pagan rites and modern Christianity . . . With solid characterizations and a fluid narrative, Cunningham gracefully crosses the borders of plausibility into a luminous metaphysical realm."
--Publishers Weekly on The Return of the Goddess: A Divine Comedy

"Captivating archetypal characters dramatize the everyday magic of self-discovery in a work as intriguing as Cunningham's previous novels . . . a beguiling tour de force."
--Publishers Weekly on The Wild Mother