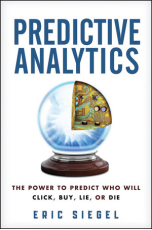 Predictive Analytics: The Power to Predict Who Will Click, Buy, Lie, or Die

You have been predicted -- by companies, governments, law enforcement, hospitals, and universities. Their computers say, "I knew you were going to do that!" These institutions are seizing upon the power to predict whether you're going to click, buy, lie, or die.

How? Prediction is powered by the world's most potent, booming unnatural resource: data. Accumulated in large part as the by-product of routine tasks, data is the unsalted, flavorless residue deposited en masse as organizations churn away. Surprise! This heap of refuse is a gold mine. Big data embodies an extraordinary wealth of experience from which to learn.

Predictive analytics unleashes the power of data. With this technology, the computer literally learns from data how to predict the future behavior of individuals. Perfect prediction is not possible, but putting odds on the future -- lifting a bit of the fog off our hazy view of tomorrow -- means pay dirt.

A truly omnipresent science, predictive analytics affects everyone, every day. Although largely unseen, it drives millions of decisions, determining whom to call, mail, investigate, incarcerate, set up on a date, or medicate.

Predictive analytics transcends human perception. This book's final chapter answers the riddle: What often happens to you that cannot be witnessed, and that you can't even be sure has happened afterward -- but that can be predicted in advance?

Whether you are a consumer of it -- or consumed by it -- get a handle on the power of Predictive Analytics.


"What Nate Silver did for poker and politics, this does for everything else. A broad, well-written book easily accessible to non-nerd readers."
-- David Leinweber, author, Nerds on Wall Street: Math, Machines and Wired Markets

"This book is an operating manual for 21st century life. Drawing predictions from big data is at the heart of nearly everything, whether it's in science, business, finance, sports, or politics. And Eric Siegel is the ideal guide."
-- Stephen Baker, author, The Numerati and Final Jeopardy: Man vs Machine and the Quest to Know Everything

"Predictive Analytics is not only a deeply informative dive into a topic that is critical to virtually every sector of business today, it is also a delight to read."
-- Geoffrey Moore, author, Crossing the Chasm

"The future is right now, you're living in it -- read this book to understand where we are and where we're headed."
-- Roger Craig, record-breaking analytical Jeopardy! champion; CEO, Cotinga