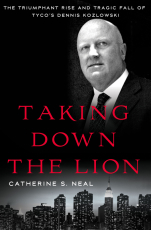 Taking Down the Lion: The Triumphant Rise and Tragic Fall of Tyco's Dennis Kozlowski

As the widely-admired CEO of Tyco International, Dennis Kozlowski grew a little-known New Hampshire conglomerate into a global giant. In a stunning series of events, Kozlowski suddenly lost his job along with his favored public status when he was indicted by legendary Manhattan DA Robert Morgenthau -- it was an inglorious end to an otherwise brilliant career. Kozlowski was made the face of corporate excess in the turbulent post-Enron environment when he was publicly castigated for his extravagant lifestyle. Kozlowski was ultimately convicted of grand larceny and other crimes that, in sum, found the former CEO guilty of wrongfully taking $100 million from Tyco. His life, once rags-to-riches success story, was irreversibly rewritten.

Taking Down the Lion shines a bright light on the Tyco corporate scandal -- it is the definitive telling of a largely misunderstood episode in U.S. business history. In an unfiltered view of corporate America, Catherine S. Neal reveals a world of big business, ambition, money, media and an epidemic of questionable ethics that infected not only business dealings but extended to attorneys, journalists, politicians, and the criminal justice system.

When the truth is told, it’s clear the "good guys" were not all good, and the "bad guys" not all bad, and that chasing the American Dream can lead to a tragic end.


"If you read Taking Down the Lion, you need to be prepared to stay awake late into the night. This is the painful yet riveting story of the government's professionally petty, jealousy-driven, crowd pleasing, yet utterly wrong and immoral destruction of an economic genius; and it is well told by Catherine S. Neal. Dennis Kozlowski created jobs and wealth in a political environment in which his work and his rewards became an obstacle for the government. This book is a tour de force in the terrors of justice which should never have happened in America. It is a story we all need to know. It could happen to any of us."
-- Hon. Andrew P. Napolitano, Senior Judicial Analyst, Fox News Channel

"In Taking Down the Lion, business ethics Professor Catherine S. Neal has the guts to take down the conventional history of the tragic fall of Tyco CEO Dennis Kozlowski. Kozlowski sits in prison longer than murderers, the victim of his outsized greed, betrayal by his Board, and unbridled prosecutorial excess. This is a contrarian view that casts a shadow on whether greed and hubris translated into criminal behavior. A riveting read, with a rigorous case that Kozlowski was railroaded."
-- James O. Campbell, Host of nationally syndicated Business Talk with Jim Campbell