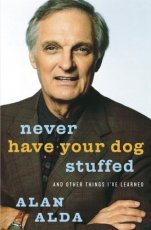 Never Have Your Dog Stuffed: And Other Things I've Learned

He's one of America's most recognizable and acclaimed actors -- a star on Broadway, an Oscar nominee for The Aviator, and, for eleven years, the inimitable Hawkeye Pierce on M*A*S*H -- during which time he became the only person ever to win Emmys for acting, writing, and directing. Now Alan Alda has written a memoir as elegant, funny, and affecting as his greatest performances.

Yet Never Have Your Dog Stuffed is not a memoir of show-business ups and downs. It is a moving and funny story of a boy growing into a man who then realizes he has only just begun to grow. It is the story of turning points in Alda's life, events that would make him what he is -- if only he could survive them.

From the moment as a boy when his dead dog is returned from the taxidermist's shop with a hideous expression on its face, and Alda learns that death can't be undone, to his decades-long effort to find compassion for the mother he lived with but never knew, to his acceptance of his father, both personally and professionally, Alda learns the hard way that change, uncertainty, and transformation are what life is made of, and that true happiness is found in embracing them.

Never Have Your Dog Stuffed, filled with wonder, good humor, and honesty, is the crowning achievement of an actor, author, and director. But surprisingly, it is the story of a life more filled with turbulence and laughter than any Alda has ever played on the stage or screen.

Reviews:
"Alan Alda's life story is as engrossing as it is moving. I couldn't put it down, and I couldn't stop laughing. With his characteristic wit and humor, Alda's gripping memoir tells of journeys through the worlds of film and theater, family and friends, the occult and science. It's the inspirational story of a man with an insatiable curiosity to understand the inner stirrings of the human soul and the outer workings of the universe."
--Brian Greene, author of The Elegant Universe

"Most theatrical memoirs are, not surprisingly, structured as dramas: The climax -- fame and accomplishments -- is hidden in and formed by the author's early struggles. Mr. Alda's book is rather different. The record runs true throughout: a story of wonder at and curious affection for the odd world around him, rather than a recitation of the various paths which led to his success. It is honest and touching and very funny -- like Mr. Alda himself."
--David Mamet, author of Glengarry Glen Ross