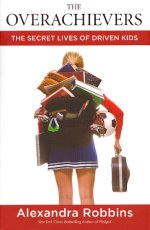 The Overachievers: The Secret Lives of Driven Kids

High school isn't what it used to be. With record numbers of students competing fiercely to get into college, schools are no longer primarily places of learning. They're dog-eat-dog battlegrounds in which kids must set aside interests and passions in order to strategize over how to game the system. In this increasingly stressful environment, kids are defined not by their character or hunger for knowledge, but by often arbitrary scores and statistics.

In The Overachievers, journalist Alexandra Robbins delivers a poignant, funny, riveting narrative that explores how our high-stakes educational culture has spiraled out of control. During the year of her ten-year reunion, Robbins returns to her high school, where she follows students including C.J. and others:

Robbins tackles hard-hitting issues such as the student and teacher cheating epidemic, overtesting, sports rage, the black market for study drugs, and a college admissions process so cutthroat that some students are driven to depression and suicide because of a B. Even the earliest years of schooling have become insanely competitive, as Robbins learned when she gained unprecedented access into the inner workings of a prestigious Manhattan kindergarten admissions office.

A compelling mix of fast-paced storytelling and engrossing investigative journalism, The Overachievers aims both to calm the admissions frenzy and to expose its escalating dangers.

"Robbins writes with empathy and affection for her college-aged subjects. Pledged is a powerful warning and an astonishing slice of American life."
--Washington Monthly

"Fascinating and, in the end, highly alarming. Pledged is amazing in the same way that reality TV is amazing: It's the car crash you can't take your eyes off of . . . Every parent of a college-bound daughter should read this book. And Alexandra Robbins: You go girl."
--The New Republic (online)