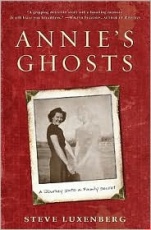 Annie's Ghosts: A Journey Into a Family Secret

Beth Luxenberg was an only child. Everyone knew it: her grown children, her friends, even people she'd only recently met. So when her secret emerged, her son Steve Luxenberg was bewildered. He was certain that his mother had no siblings, just as he knew that her name was Beth, and that she had raised her children, above all, to tell the truth.

By then, Beth was nearly eighty, and in fragile health. While seeing a new doctor, she had casually mentioned a disabled sister, sent away at age two. For what reason? Was she physically disabled? Mentally ill? The questions were dizzying, the answers out of reach. Beth had said she knew nothing of her sister's fate.

Six months after Beth's death in 1999, the secret surfaced once more. This time, it had a name: Annie.

Steve Luxenberg began digging. As he dug, he uncovered more and more. His mother's name wasn't Beth. His aunt hadn't been two when she'd been hospitalized. She'd been twenty-one; his mother had been twenty-three. The sisters had grown up together. Annie had spent the rest of her life in a mental institution, while Beth had set out to hide her sister's existence. Why?

Employing his skills as a journalist while struggling to maintain his empathy as a son, Luxenberg pieces together the story of his mother's motivations, his aunt's unknown life, and the times in which they lived. His search takes him to imperial Russia and Depression-era Detroit, through the Holocaust in Ukraine and the Philippine war zone, and back to the hospitals where Annie and many others were lost to memory.

Combining the power of reportage with the intrigue of mystery, Annie's Ghosts explores the nature of self-deception and self-preservation. The result is equal parts memoir, social history, and riveting detective story.

Reviews:
"Luxenberg's beautiful book is in part the story of secrecy itself, when words carried mysterious power and wounds could not be healed through forgiveness."
--Melissa Fay Greene, author of Praying for Sheetrock and There Is No Me Without You

"It is too simple to call this a magnificent detective story. More than that, Annie's Ghosts is an honest and faithful rumination on a sad, delicate mystery . . . a remarkable journey to the very center of a secret."
--David Simon, creator of HBO's The Wire

"Steve Luxenberg's hunt for the story of his hidden aunt is both a gripping detective story and a haunting memoir. It will leave you breathless. The personal tale is astonishing, and Luxenberg uses it to explore, in a deft and poignant way, the nature of secrets, memories, historical truth, and family love."
--Walter Isaacson, author of Einstein and Benjamin Franklin

"Steve Luxenberg sleuths his family's hidden history with the skills of an investigative reporter, the instincts of a mystery writer, and the sympathy of a loving son. His rediscovery of one lost woman illuminates the shocking fate of thousands of Americans who disappeared just a generation ago."
--Tony Horwitz, author of A Voyage Long and Strange and Confederates in the Attic

"Annie's Ghosts is perhaps the most honest, and one of the most remarkable books I have ever read. It is an exploration into a family's past, a relentless hunt that unearths buried secrets with multiple layers and the uncertain motives of their keepers, and one son's attempt to fully understand the details and meaning of what has been hidden . . . From mental institutions to the Holocaust, from mothers and fathers to children and childhood, with its mysteries, sadness and joy--this book is one emotional ride."
--Bob Woodward, author of The War Within and State of Denial

"I started reading within minutes of picking up this book, and was instantly mesmerized. It's a riveting detective story, a moving family saga, an enlightening if heartbreaking chapter in the history of America's treatment of people born with what we now call special needs."
--Deborah Tannen, author of You Just Don't Understand and You're Wearing That?

"This is a memoir that pushes the journalistic envelope . . . Luxenberg has written a fascinating personal story as well as a report on our communal response to the mentally ill."
--Helen Epstein, author of Where She Came From and Children of the Holocaust